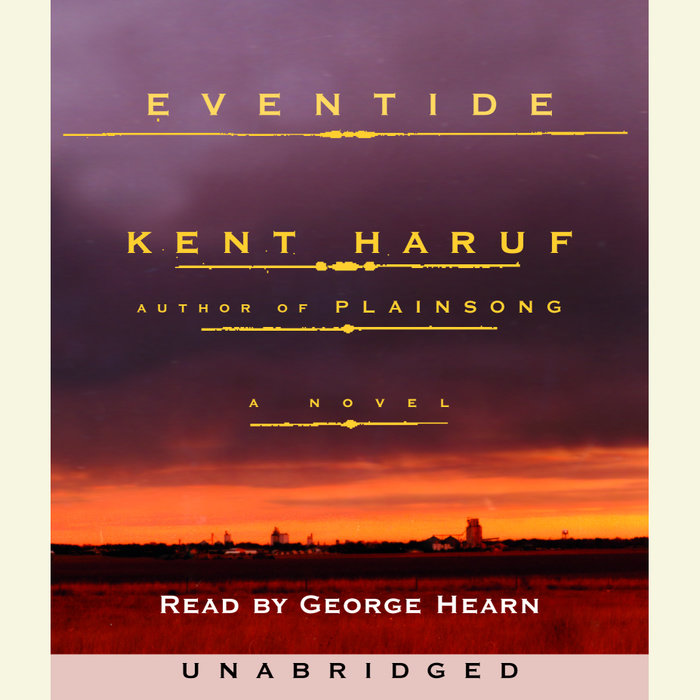 One of the most beloved novels in recent years, Plainsong was a best-seller from coast to coast—and now Kent Haruf returns to the High Plains community of Holt, Colorado, with a story of even more masterful authority.

When the McPheron brothers see Victoria Roubideaux, the single mother they’d taken in, move from their ranch to begin college, an emptiness opens before them—and for many other townspeople it also promises to be a long, hard winter. A young boy living alone with his grandfather helps out a neighbor whose husband, off in Alaska, suddenly isn’t coming home, leaving her to raise their two daughters. At school the children of a disabled couple suffer indignities that their parents know all too well in their own lives, with only a social worker to look after them and a violent relative to endanger them further. But in a small town a great many people encounter one another frequently, often surprisingly, and destinies soon become entwined—for good and for ill—as they confront events that sorely test the limits of their resilience and means, with no refuge available except what their own character and that of others afford them.

Spring eventually does reach across the land, and how the people of Eventide get there makes for an engrossing, profoundly moving novel rich in the wisdom, humor, and humanity for which Kent Haruf is justly acclaimed.
Read More
"Beautifully crafted and moving . . . Holt, Colorado [is] a town as fully realized and richly imagined as Faulkner's Jefferson, Mississippi." --Bill Marvel, Dallas Morning News

"[Eventide] possesses the haunting appeal of music, the folksy rhythms of an American ballad and the lovely, measured grace of an old hymn . . . Mr. Haruf's understated prose, combined with his emotional wisdom and his easy affection for his characters turns [the novel's] events into affecting drama. In mapping the postage-stamp-size world of Holt, he has limned the loneliness of the people there and their resilience and capacity for hope."--Michiko Kakutani, New York Times

"There's a decency that shines in the very accuracy with which [Haruf] describes the ordinary. Scene after scene, from cattle auction to back-booth seduction . . . flows by us as clear as spring water, proof that truth, like virtue, has its own reward."--Michael Harris, Los Angeles Times Book Review

"Eventide is a lovely novel, all the more for its uncomprimising realism, its eschewing of the magical pallative of happy endings, its recognition that decency carries its own unique rewards."--Joan Mellen, Baltimore Sun

“Highly charged and compassionate . . . Every action in Holt casts a long shadow, and the gist of Haruf’s story is what happens when those shadows touch . . . Haruf’s writing draws power from his sense of character–its limitations and its possibilities–and how it propels action.”–New Yorker

“A kind book in a cruel world…[with] honest impulses, real people and the occasional workings of grace.”--Christopher Tilghman, Washington Post

"Haruf is a master of evocative description, [and his] lyrical style, which has been compared to that of Hemingway and Chekhov . . . quickly infects the reader with its own peculiar rhythms, to the point at which putting down the book and returning to real-world conversation is jarring. Most important, there is Haruf's spirit, which suggests that people unrelated by blood can and must form families, that a simple act of goodwill can occur even when it seems impossible."--Gail Pennington, St. Louis Post-Dispatch

"Haruf's prose style emerges from behind [his] cast with a sober, homespun beauty . . . With Eventide, [he] has made them a permanent addition to the literary map of this country."--John Freeman, Milwaukee Journal-Star

"Eventide is a spare, delicate and beautiful book [that is] set in a world where an 11-year-old boy and an old bachelor rancher can both experience the wonder of a first kiss . . . Haruf has created another poignant meditation on the true meaning of family."--April Henry, Oregonian

"[Eventide] is a clear distillation of the writer's craft, a book that grabs you by the heart on the first page, refusing to release its grasp until the last . . . Just as day moves from late afternoon into night, Haruf's characters move inevitably toward, and through, personal challenge, [and] it is through these lives, both distinct and entwined, that Haruf quietly explores all that makes us human."--Robin Vidimos, Denver Post

"Haruf has once again demonstrated that he can push a tale featuring our Western landscape beyond romanticized cowboy myth into distilled reality."--Jenny Shank, Rocky Mountain News

"This hardscrabble story kicks up a dust cloud of melancholy that will sting even the most hardened readers' eyes. At the end of some chapters I was left wondering, Who in America can still write like this? Who else has such confidence and such humility?"--Ron Charles, Christian Science Monitor

"A stunning novel of brothers, land, grief, and redemption...The dry, cold air of Colorado's high plains seems to intensify the light Kent Haruf shines on every character in his masterful novel Eventide. He brings such grace and care to his examination of the ways we fail and, sometimes, help one another, that the end result is a book of hope, hope as plain and hard-won as Haruf's keenly styled prose.--Mark Doty, O Magazine

"This novelist writes with such unabashed wonder before life's mysteries, such compassion for frail humanity that he seems to have issued from another time, a better place."--Dan Cryer, Newsday

"Masterful... A full and satisfying novel complete unto itself [that] might be even more emotionally powerful than its predecessor . . ." --Karen Sandstrom, Cleveland Plain Dealer

"In creating a place whose people are tethered to each other by history and emotion as much as place, Haruf's work is now competing with Faulkner's Mississippi, Sherwood Anderon's Midwest, and Wallace Stegner's northern California."
--Mark Athitakis, Chicago Sun-Times

"Luminous . . . Haruf's uncanny ability to stay out of his characters' way is evident again in Eventide. What comes out of their mouths, whether it is kind, mean, ignorant, confused, intelligent or clouded by loneliness, is true and hard, spare as life on the plains . . . Eventide depicts a time, a place and its people so sincerely and so compellingly, with moments of such rare beauty, that the reader cannot walk away."
--Kathryn Eastburn, Colorado Springs Independent

"Like the lives he chronicles, Haruf's prose moves relentlessly forward, catching in his images the fierceness and sweetness of experience.
"--Mickey Pearlman, Minneapolis Star-Tribune

"Haruf is the author of some of the best fiction about American small-town and rural life being written today. As readers of Plainsong know, Haruf's taut, unsentimental storytelling and spare, graceful prose are capable of transporting the imagination to a deeper understanding of human responsibility and connection . . . Eventide offers many of the pleasures of Plainsong: a strong storyline, Haruf's wonderful, unadorned prose and several familiar characters . . . [But it ] takes on very different tonality and complexion from its predecessor. If Plainsong is morning or afternoon on the prairie, then Eventide is dusk; it is filled with a beautiful but somber light."--Alden Mudge, BookPage

"Haruf’s follow-up to the critically acclaimed and bestselling Plainsong is as lovely and accomplished as its predecessor. The aging bachelor McPheron brothers and their beloved charges, Victoria and her daughter, Katie, return (though Victoria quickly heads off to college), and Haruf introduces new folks–a disabled couple and their children, an old man and the grandson who lives with him–in this moving exploration of smalltown lives in rural Holt, Colo. Ranchers Raymond and Harold McPheron have spent their whole lives running land that has been in their family for many generations, so when Harold is killed by an enraged bull, worn-out Raymond faces a void unlike any he has ever known. His subsequent first-ever attempts at courtship and romance are almost heartbreaking in their innocence, but after some missteps, he finds unexpected happiness with kind Rose Tyler. Rose is the caseworker for a poor couple struggling so dimly and futilely to better their lives that it becomes painful to witness. Children play crucial roles in the novel’s tapestry of rural life, and they are not spared life’s trials. But Haruf’s characters, such as 11-year-old orphan DJ Kephart, who cares for his retired railroad worker grandfather, and Mary Wells, whose husband abandons her with two young girls, maintain an elemental dignity no matter how buffeted by adversity. And while there is much sadness and hardship in this portrait of a community, Haruf’s sympathy for his characters, no matter how flawed they are, make this an uncommonly rich novel."
--Publishers Weekly, starred review 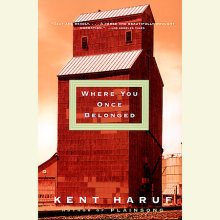 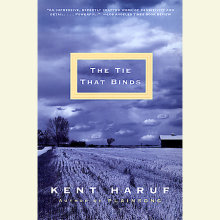 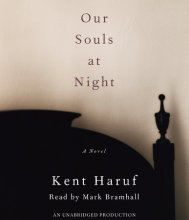 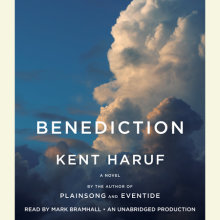