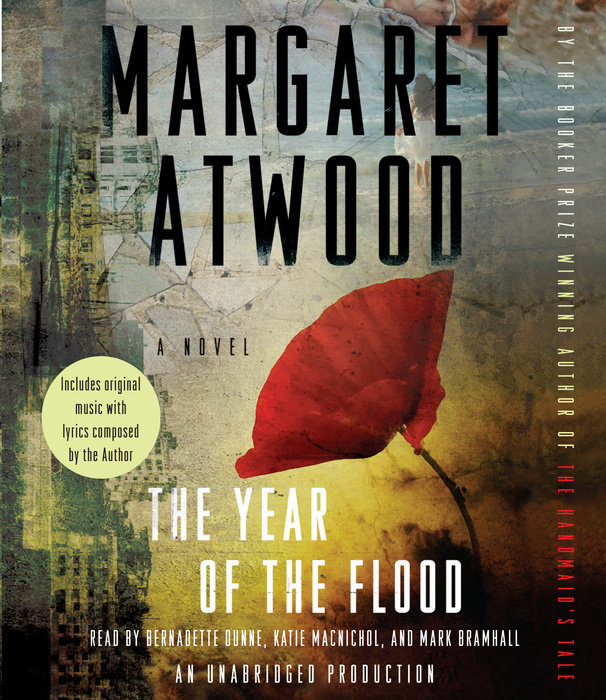 The long-awaited new novel from Margaret Atwood. The Year of the Flood is a dystopic masterpiece and a testament to her visionary power.

The times and species have been changing at a rapid rate, and the social compact is wearing as thin as environmental stability. Adam One, the kindly leader of the God's Gardeners—a religion devoted to the melding of science and religion, as well as the preservation of all plant and animal life—has long predicted a natural disaster that will alter Earth as we know it. Now it has occurred, obliterating most human life. Two women have survived: Ren, a young trapeze dancer locked inside the high-end sex club Scales and Tails, and Toby, a God's Gardener barricaded inside a luxurious spa where many of the treatments are edible.

Have others survived? Ren's bioartist friend Amanda? Zeb, her eco-fighter stepfather? Her onetime lover, Jimmy? Or the murderous Painballers, survivors of the mutual-elimination Painball prison? Not to mention the shadowy, corrupt policing force of the ruling powers . . .

Meanwhile, gene-spliced life forms are proliferating: the lion/lamb blends, the Mo'hair sheep with human hair, the pigs with human brain tissue. As Adam One and his intrepid hemp-clad band make their way through this strange new world, Ren and Toby will have to decide on their next move. They can't stay locked away . . .

By turns dark, tender, violent, thoughtful, and uneasily hilarious, The Year of the Flood is Atwood at her most brilliant and inventive.


From the Hardcover edition.
Read More
"A gripping and visceral book that showcases the pure storytelling talents she displayed with such verve in her 2000 novel, The Blind Assassin."
—Michiko Kakutani, The New York Times

"Atwood is funny and clever, such a good writer and real thinker.... As ever with Atwood, it is friendship between women that is noted and celebrated - friendship not without its jealousies but friendship that survives rivalry and disappointment, and has a generosity that at the end of the novel allows for hope.... We don't know how [human nature] will evolve, or if we will evolve at all. The Year of the Flood isn't prophecy, but it is eerily plausible."
—Jeanette Winterson, The New York Time Book Review

"Canada's greatest living novelist undoubtedly knows how to tell a gripping story, as fans of The Blind Assassin and A Handmaid's Tale already know. But here there's a serious message too: Look at what we're doing right now to our world, to nature, to ourselves. If this goes on..."
—The Washington Post

"One of the versatile Atwood's authorial calling cards, as far back as her early novel The Handmaid's Tale, has been that of ruthless investigator, never hesitating to cut to bone in describing real-as-life dystopias. In this work, however, she also appears to be having wild fun, gunning it like a daredevil race-car driver: The Year of the Flood serves as an old-fashioned alarm (moral, ecological), a zombie thriller and a series of swashbuckling pokes at modern institutions.... To Atwood's supreme credit, her story is enthralling.... Memorable characters, a tightly controlled pace and shockingly plausible scenes make it fly - to a mysterious, skin-prickling ending. If Atwood also inspires ways to prevent such a gruesomely likely future, we'll owe her far more than literary admiration."
—San Francisco Chronicle

"Atwood unflinchingly holds aloft the sanctity of life - for all species - and the human quest for love."
—Chicago Sun-Times

"The Year of the Flood is timely and gripping.... Atwood creates a totally believable futuristic world in which people, for the most part, are the beasts. Those who have retained their humanity are the outlaws. But no matter what the setting, Atwood just tells a good story, one filled with suspense and even levity."
—USA Today

"Atwood scores a 10 when it comes to creating, from the stragglers of the old one, a whole new world.... Toby, Ren, and their lost-soul friend Amanda, would be sympathetic characters in any setting. That Atwood conjures them into this madcap setting, where vultures open 'like black umbrellas,' misdeeds are punished by kidney removal, and bracelets are made of jellyfish, makes us love them even more."
—Philadelphia Inquirer

"The Year of the Flood consistently does what one expects of any work by Margaret Atwood: It entertains, spins out suspense and rewards a reader's basic impulse, all the while subtly and expertly maintaining its literary respectability."
—Minneapolis Star Tribune

"[The Year of the Flood] shows the Nobel Prize-worthy Atwood … at the pinnacle of her prodigious creative powers. Her weigh-in on the breakdown of the social covenant comes during a time of historic global change that her story eerily both mirrors and foretells."
—Elle Magazine

"There is gallows humor, and then there is Margaret Atwood. The masterful Canadian writer is emerging as literature's queen of the apocalypse. And the dark visions Atwood again summons in The Year of the Flood prove quite illuminating."
—Associated Press

"Profoundly imagined. . . . This is a gutsy and expansive novel, rich with ideas and conceits."
—Publishers Weekly, starred review

"Atwood orchestrates her narratives into a heart-pounding, mysterious and surprisingly touching finale. She enchants us so convincingly that after her spell is over, the 'real' world seems temporarily transformed. The Year of the Flood is both a warning and a gift."
—NPR.org

"Atwood's latest is a fiercely imagined tale of suffering that rivals Job's.... As dark as Atwood's vision may be, the bonds among her women giver he work a bittersweet power."
—People

"This is a work that amuses, informs, enlightens and, remarkably, also challenges its readers to be better persons."
—San Antonio Express-News
"Atwood's mischievous, suspenseful, and sagacious dystopian novel follows the trajectory of current environmental debacles to a shattering possible conclusion with passionate concern and arch humor."
—Booklist, starred review

"Iconic Canadian author Margaret Atwood has once again written about a distressingly near future in which mass murder may be the best way to save the world."
—Ms. Magazine

Praise for Oryx and Crake:

"Oyrx and Crake is a cautionary tale about humanity swept downriver on a raft."
—Mel Gussow, New York Times

"The novel's tantalizing questions will have readers turning the pages of this extraordinary book as fast as humanly possible. . . . Like Orwell and Huxley before her, Atwood takes the world as we know it and suggests scenarios both frightening and all-too-probable . . .
"Brilliant, provocative, sumptuous and downright terrifying, Oryx and Crake is a sharp-edged down-and-dirty page-turner with a deftly wrought message in Atwood's smart electric language."
—Victoria Brownworth, Baltimore Sun

"A dystopian novel is not intended as a literal forecast, or even necessarily as a logical extension of our current world. It is simply, and not so simply, a bad dream of our present time, an exquisitely designed horror show in which things are changed from what we do know to a dream version of what we don't. . . . Atwood does Orwell one better . . . A "towering and intrepid new novel."
—Lorrie Moore, The New Yorker

"A landmark work of speculative fiction, comparable to A Clockwork Orange, Brave New World, and We. Atwood has surpassed herself."
—Kirkus Reviews

"Chesterton once wrote of the 'thousand romances that lie secreted in The Origin of Species.' Atwood has extracted one of the most hair-raising of them, and one of the most brilliant. . . . A potential dystopian classic."
—Publishers Weekly 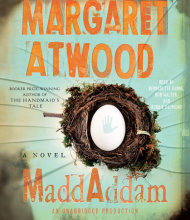 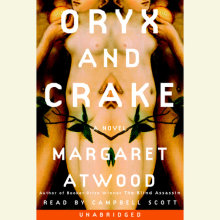