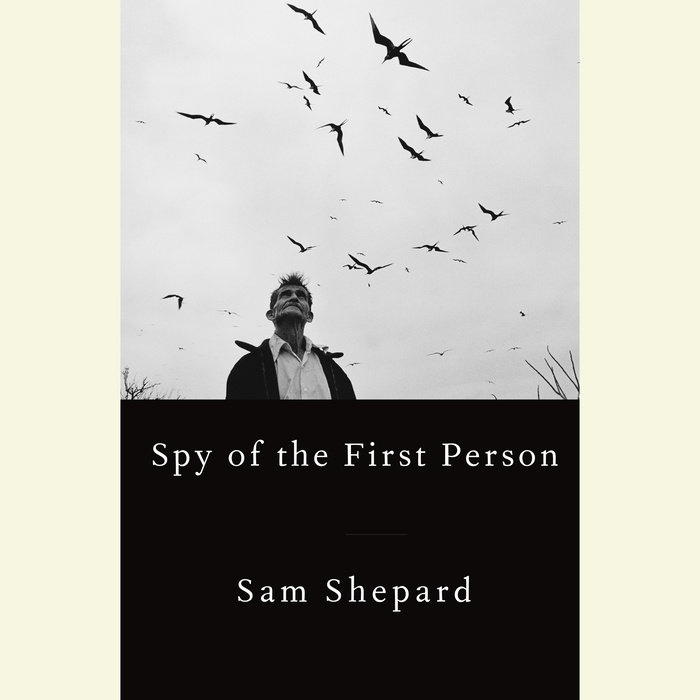 The final work from the Pulitzer Prize–winning writer, actor, and musician, drawn from his transformative last days

In searing, beautiful prose, Sam Shepard’s extraordinary narrative leaps off the page with its immediacy and power. It tells in a brilliant braid of voices the story of an unnamed narrator who traces, before our rapt eyes, his memories of work, adventure, and travel as he undergoes medical tests and treatments for a condition that is rendering him more and more dependent on the loved ones who are caring for him. The narrator’s memories and preoccupations often echo those of our current moment—for here are stories of immigration and community, inclusion and exclusion, suspicion and trust. But at the book’s core, and his, is family—his relationships with those he loved, and with the natural world around him. Vivid, haunting, and deeply moving, Spy of the First Person takes us from the sculpted gardens of a renowned clinic in Arizona to the blue waters surrounding Alcatraz, from a New Mexico border town to a condemned building on New York City’s Avenue C. It is an unflinching expression of the vulnerabilities that make us human—and an unbound celebration of family and life.
Read More
“Sam Shepard's Spy of the First Person is a devastating work that is also full of life and wonder. From its heartbreaking dedication to him by his children to its last longing and truthful pages, it is an intimate masterwork.”
—Michael Ondaatje, Booker Prize–winning author of The English Patient

“Moving. . . . Sly and revealing. . . . This novel’s themes are echt Shepard: fathers and sons; shifting identities and competing versions of reality; a sense that there are watchers and there are watchees in this world of dusty gravitas. . . . You can tell you are moving into the realm of myth when you are holding a slender novel like this one that has large type and ample margins, to give the words room to reverberate. . . . There are echoes of Beckett in this novel’s abstemious style and existential echoes.”
—Dwight Garner, The New York Times

“Eloquent. . . . Its effect is one of atmosphere rather than narrative, an aching requiem sung in the shadow of extinction. . . . Shepard’s gaunt lyricism conjures an album of bleached images in which the life of a man and the changing face of a country are cataloged with both love and bafflement. . . . A lived richness burnishes each page. . . . It is difficult not to be moved by these sparks of beauty and belonging. They light up all the brighter for how quickly they go dark.”
—Dustin Illingworth, Los Angeles Times

“Beautiful . . . Cryptic, almost hallucinatory. . . . Remarkable. . . . There’s a subtle curiosity at work, too, the curiosity of a writer to the very end. Unsettling, yet brave.”
—Jocelyn McClurg, USA Today

“In Spy of the First Person, two narrative voices wind together in beguiling fashion. . . . Spy of the First Person returns to the uncanny experience evoked in all of Shepard’s fiction of being both the observer and the observed. . . . Shepard has always been a spare and oblique writer, creating a sense of dreamy discomfort. . . . The sketches jump to northern California, the Alcatraz prison, a doctor’s office in Arizona and even the squats of the Lower East Side in the 1970s. But as always, the itinerancy masks a profound feeling of imprisonment, as the scenes inevitably circle back to the old man on the porch, who has been rendered so immobile that he has to ask for help to scratch an itch on his face. Yet that appeal for help marks a small but significant change. Shepard’s wanderers have usually been on unaccompanied journeys with no departure or destination, only an ever-repeating present instant. But Spy of the First Person ends with a scene of family solidarity. The old man watches himself being pushed in a wheelchair to a crowded Mexican restaurant. . . . ‘The thing I remember most,’ he thinks, ‘is being more or less helpless and the strength of my sons.’ At last he has no choice but to accept the company of others as he travels through the great wide American somewhere.”
—Sam Sacks, The Wall Street Journal

“As the narrator’s body grows weaker, his days are filled with trips to the clinic with loved ones, and a cascade of memories—orchards, surfers, the mid-1970s. He describes being ‘exhausted from the chaos of this era’—‘Napalm. Cambodia. Nixon. Tet Offensive. Watergate. Secretariat. Muhammad Ali.’ . . . He has rendered the thoughtful, interior months of his own last act into spare and profound prose.”
—Jane Ciabattari, BBC

“Powerful. . . . Ultimately, Shepard drops all pretense, closing out this collection with two heartbreaking chapters detailing his final days, and bringing the reader up close to what Rilke called ‘undiluted death.’”
—John Winters, WBUR

“Spy of the First Person captivates in its distillation of many of Shepard’s enduring themes—the death of America’s frontier, identity and loneliness. . . . Shepard illuminates loneliness beautifully in this slight but rich and moving final work. In the final lines the old man sees ‘the moon getting bigger and brighter . . . two sons and their father, everyone trailing behind.’ Shepard’s valedictory message is one of hope.”
—Alasdair Lees, The Independent (London)

“There’s plainspoken reflection on the tempos of everyday life, in a signature style that lopes elegantly and rhythmically across the page. . . . Surreality emerges in Shepard’s visions of his mundane West, as well as the familiar voice of a lonely, achingly acute observer. . . . The pages of a man’s life, with all its glory and monotony, are sewn together here with steady pathos and flashes of brilliance, dark and light.”
—Molly Boyle, Santa Fe New Mexican

“Spare but not slight, surreal yet stoic, an intriguing and moving glimpse into what falls away and what still matters at the end. . . . Shepard evokes the sense of mystery and the exploration of the myth of the American West that permeated so much of his work. . . . With Spy of the First Person, Shepard exited head up.”
—Colette Bancroft, Tampa Bay Times

“It is, radiantly, Shepard’s voice. . . . Shepard lets his characters keep their secrets, even as they reveal timeless and universal truths. . . . [A] stunning and eloquent final soliloquy.”
—Lew J. Whittington, New York Journal of Books

"Snares with virtuoso precision both nature’s constant vibrancy and the stop-action of illness. Told in short takes pulsing with life and rueful wit. . . . Offers acid commentary on episodes in American history, and revels in the resonance of words. . . . A gorgeously courageous and sagacious coda to Shepard’s innovative and soulful body of work.”
—Donna Seaman, Booklist (starred review)

“A sharply observed, slender novel set in familiar Shepard territory: a dusty, windblown West of limitless horizons and limited means of escape. . . . Offers arresting portent. . . . It’s exactly of a piece with True West and other early Shepard standards, and one can imagine Shepard himself playing the part of that old man in an understated, stoical film. . . . In the end, this is a story less of action than of mood, and that mood is overwhelmingly, achingly melancholic. The story is modest, the poetry superb. A most worthy valediction.”
—Kirkus Reviews (starred)
Read More

6 Listens to Get You Through Winter