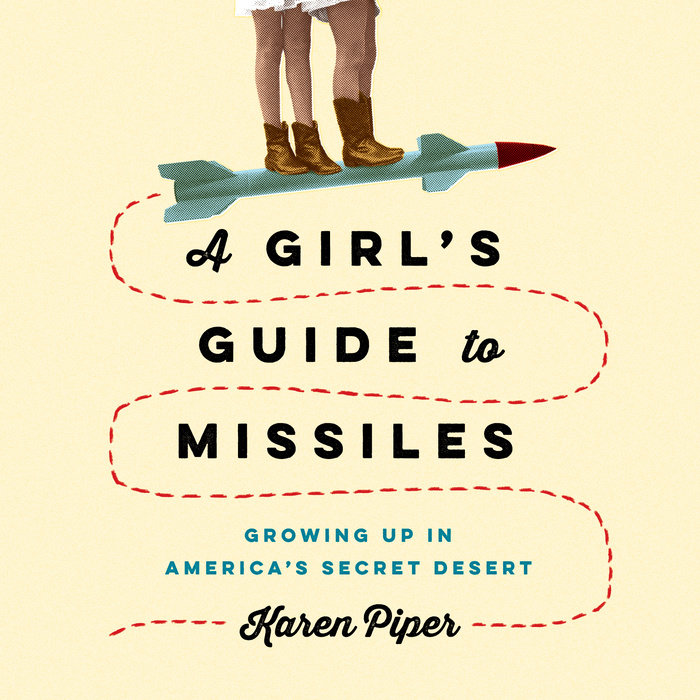 A surreal and poignant coming of age on a secretive missile facility, and "an incredible view of...life in a town built for war."--Booklist

The China Lake missile range is located in a huge stretch of the Mojave Desert, about the size of the state of Delaware. It was created during the Second World War, and has always been shrouded in secrecy. But people who make missiles and other weapons are regular working people, with domestic routines and everyday dilemmas, and four of them were Karen Piper's parents, her sister, and--when she needed summer jobs--herself. Her dad designed the Sidewinder, which was ultimately used catastrophically in Vietnam. When her mom got tired of being a stay-at-home mom, she went to work on the Tomahawk. Once, when a missile nose needed to be taken offsite for final testing, her mother loaded it into the trunk of the family car, and set off down a Los Angeles freeway. Traffic was heavy, and so she stopped off at the mall, leaving the missile in the parking lot.

Piper sketches in the belief systems--from Amway's get-rich schemes to propaganda in The Rocketeer to evangelism, along with fears of a Lemurian takeover and Charles Manson--that governed their lives. Her memoir is also a search for the truth of the past and what really brought her parents to China Lake with two young daughters, a story that reaches back to her father's World War II flights with contraband across Europe. Finally, it recounts the crossroads moment in a young woman's life when she finally found a way out of a culture of secrets and fear, and out of the desert.
Read More
“Karen Piper's A Girl's Guide To Missiles reaches back into the body of American war and retrieves the heart of a girl, still beating, not beaten. Her memoir riveted me--I read it in one sitting holding my breath as she made a story braid from growing up a girl and growing up in the military industrial complex at the China Lake missile range. Gender, family, war, and American myth-making make this an unforgettable book and a radical act of truth-telling.” --Lidia Yuknavitch, author of The Book of Joan and The Chronology of Water

“Karen Piper lived the escalating levels of insanity of the cold war from the inside, playing her girlhood games in the top secret labs and working beside her parents in a hidden corner of the Mojave. The bombs of tomorrow were a family affair, and the truth was always tricky.  For Piper, who writes like a dream, failed test shots mirror busted romances, and the excesses of the era eventually lead our missile girl to communal life in a bomb-proof Oregon. A Girl’s Guide to Missiles is a family portrait, a missile-science primer, a coming of nuclear age. Piper captures the soul of an era that might not be so long gone as we would hope.” –Bill Roorbach, author of Life Among Giants, The Remedy for Love, and The Girl of the Lake

“Brilliantly overdetermined setup, one that yields both black comedy and sickening lurches of insight.” -- Harper's

“[A] fascinating memoir . . . [Piper] offers an incredible view of a little-known community, from WWII all the way through 9/11, and examines how her family navigated life in a town built for war.” --Booklist