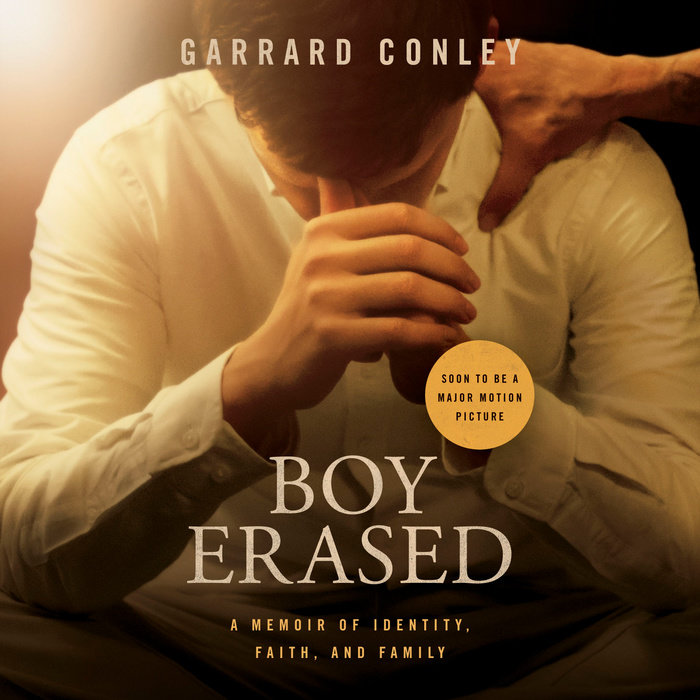 The son of a Baptist pastor and deeply embedded in church life in small town Arkansas, as a young man Garrard Conley was terrified and conflicted about his sexuality.

When Garrard was a nineteen-year-old college student, he was outed to his parents, and was forced to make a life-changing decision: either agree to attend a church-supported conversion therapy program that promised to “cure” him of homosexuality; or risk losing family, friends, and the God he had prayed to every day of his life. Through an institutionalized Twelve-Step Program heavy on Bible study, he was supposed to emerge heterosexual, ex-gay, cleansed of impure urges and stronger in his faith in God for his brush with sin. Instead, even when faced with a harrowing and brutal journey, Garrard found the strength and understanding to break out in search of his true self and forgiveness.

By confronting his buried past and the burden of a life lived in shadow, Garrard traces the complex relationships among family, faith, and community. At times heart-breaking, at times triumphant, this memoir is a testament to love that survives despite all odds.
Read More
"[A] powerful convergence of events that Conley portrays eloquently." —Washington Post

"The power of Conley’s story resides not only in the vividly depicted grotesqueries of the therapy system, but in his lyrical writing about sexuality and love, and his reflections on the Southern family and culture that shaped him." —Los Angeles Times

“This brave and bracing memoir is an urgent reminder that America remains a place where queer people have to fight for their lives. It’s also a generous portrait of a family in which the myths of prejudice give way before the reality of love. Equal parts sympathy and rage, Boy Erased is a necessary, beautiful book.” —Garth Greenwell, author of What Belongs to You

"A brave, powerful meditation on identity and faith, Boy Erased is the story of one man’s journey to accepting himself and overcoming shame and trauma in the midst of deep-rooted bigotry." —Buzzfeed (Buzzfeed's Hot Summer Reads)

"A moving memoir about discovering your true self, Boy Erased is a must-read." —Bustle

“Boy Erased is a gut-punch of a memoir, but the miracle of this book is the generosity with which Conley writes in an effort to understand the circumstances and motivations that led his family to seek the “cure”… his memoir is not simply a story of survival — in this book, a true writer comes of age. Conley writes vividly, with intelligence, wit, and genuine empathy. By embracing complexity and compassion, he reclaims his life and reminds us that a story rarely belongs to one person alone.” —LA Review of Books

“Well-written, compelling, disturbing, and ultimately quite bracing, this is an important, refreshingly unsentimental perspective on the dangers and abuses of ex-gay therapy ministries.”  —Bay Area Reporter

“Wrenching and absorbing.” —Travel and Leisure

“A compelling story of perseverance and humanity.” —Outsmart Magazine

“Boy Erased isn’t a smug tale of liberal awakening: Conley is frank and articulate about the sense of loss that has come with denying his religion and, as a consequence, the family he still loves…[Conley’s] writerly eye often wanders outside non-fiction’s usual constraints. Writing stories is the work he wants to do; this book is clearly the work he needed to do.” —Toronto Star

"Exceptionally well-written... This timely addition to the debate on conversion therapy will build sympathy for both children and parents who avail themselves of it while still showing how damaging it can be." —Publishers Weekly, STARRED review

“In a sharp and shocking debut memoir, Conley digs deep into the ex-gay therapy system… An engaging memoir that will inevitably make readers long for a more equal future.” —Kirkus Reviews

"An essential document of the early 21st Century. Conley bears witness to something history will eventually condemn as too horrible to have happened, but he also takes the pain of "ex-gay therapy" and makes of it not just a record but a wonder."
—Alexander Chee, author of The Queen of the Night

“A brave account of a young man coming to terms with his sexuality in an environment that reviles him for it. A triumphant, heartfelt story.” —Julia Scheeres, New York Times–bestselling author of Jesus Land and A Thousand Lives

"Garrard Conley has a hell of story to tell, but he tells it with complete intelligence and gravity and beauty.  This is a book that matters on every level, from the most intimate to the most political, and it settles into the reader's memory perfectly and permanently. Boy Erased is the book for our times — an important book, and a true companion." —Rebecca Lee, author of Bobcat and Other Stories

“Conley tells his story beautifully, with candor and courage and with compassion not only for the boy he was but for the parents who sent him to ex-gay therapy. Here at last is a story of evangelical homophobia from the inside, from a survivor and former believer, rather than from the incredulous outside. A vital book for young people still struggling with self-hatred inside the church and for anyone who’s escaped it.” —Maud Newton

“Garrard Conley’s memoir about his time in the ex-gay movement is actually about surviving an attempt at soul-murder. This is a book that had to be written, and it deserves a wide audience.” —Charles Baxter, author of The Feast of Love

“In 1982, Edmund White broke literary ground with his memoir A. Now it’s Garrard Conley’s turn to bring his own story to readers. As White was three decades ago for his generation, Conley is an important and necessary contemporary voice.” —Ann Hood, author of The Knitting Circle and Comfort
Read More

Books on Screen: Fall 2018 Adaptations Not to Miss6 LGBTQIA Memoirs You Should Listen To