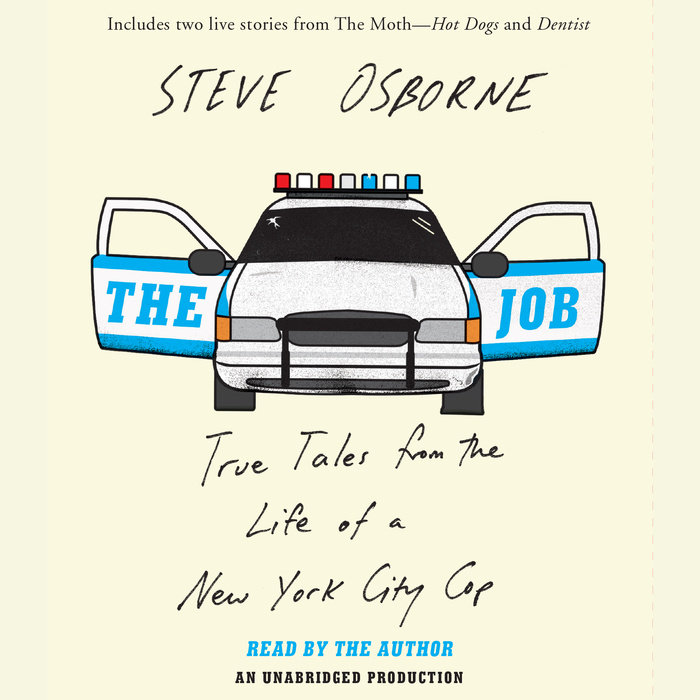 With these four syllables, delivered in an unmistakably authentic New York accent, Steve Osborne has riveted thousands of people through the legendary storytelling outfit The Moth (and over a million times on their website) with his hilarious, profane, and touching tales from his twenty years served as an NYPD street cop. Steve Osborne is the real deal, people, the tough streetwise New York cop of your dreams, one with a big big heart. Kojak? NYPD Blue? Law & Order? Fuggedaboutem! The Job blows them out of the water with this unputdownable book.

Steve Osborne has seen a thing or two in his twenty years in the NYPD—some harmless things, some definitely not. In "Stakeout," Steve and his partner mistake a Manhattan dentist for an armed robbery suspect and reduce the man down to a puddle of snot and tears when questioning him. In "Mug Shot," the mother of a suspected criminal makes a strange request and provides a sobering reminder of the humanity at stake in his profession. And in "Home," the image of his family provides the adrenaline he needs to fight for his life when assaulted by two armed and violent crackheads. From his days as a rookie cop to the time spent patrolling in the Anti-Crime Unit—and his visceral, harrowing recollections of working during 9/11—Steve Osborne's stories capture both the absurdity of police work and the bravery of those who do it. His stories will speak to those nostalgic for the New York City of the 1980s and '90s, a bygone era of when the city was a crazier, more dangerous (and possibly more interesting) place.

Includes two live stories from The Moth—Hot Dogs and Dentist

Stories from The Moth courtesy of The Moth.
Read More
Praise for The Job:

"Osborne has the macabre sense of humor people in adrenaline-jacked jobs often develop, as well as the yarn spinner's gift for building to the big reveal."
—The New York Times Book Review

"Cops are innately good storytellers, and Osborne must be one of the best."
—Booklist, starred review

"Tonally, he comes off as an avuncular, world-weary tough guy, embodying the “cops know best” attitude that many find alienating. Yet he elevates his perspective by displaying empathy for the civilians, victims and even criminals he has encountered, drawing complex lines between the “lost souls” and “evil motherfuckers” of the underworld... [T]hese punchy policing tales seem provocatively true to life."
—Kirkus Reviews

"Not only was Osborne an excellent policeman (he retired as a lieutenant and the commanding officer of the Manhattan Gang Squad), he's a fabulous storyteller, crafting his memories into well-honed tales filled with drama, humor and heart."
—BookPage

“Steve Osborne is a born storyteller, and anyone expecting a cop book to be filled with action and adventure won’t be disappointed with The Job. But what makes this story so powerful is its compassion and bittersweet comedy, the unexpected moments in which the worst situations bring out the best in people. Anyone who knows a cop—or wants to—should read this book.”
—Edward Conlon, author of Blue Blood

“Nobody tells a cop story better than a cop, and Osborne tells them as well as I’ve ever heard (and I’ve heard a lot of them). Go buy this book, for the chases, the laughs, and the poignancy. Go buy it now, especially now, because for every bad cop there are twenty heroic ones—and Steve Osborne was one of them.”
—Brian McDonald, author of My Father’s Gun: One Family. Three Badges. One Hundred Years in the NYPD
Read More