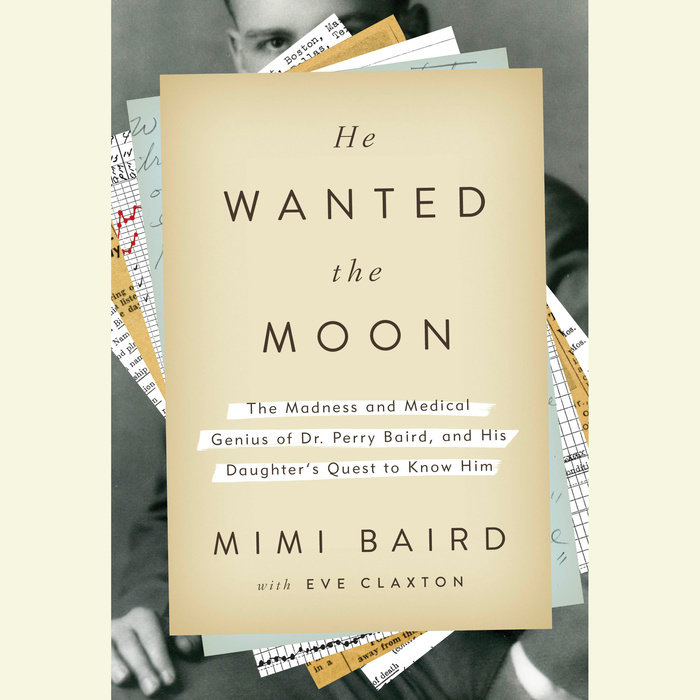 Soon to be a major motion picture, from Brad Pitt and Tony Kushner

A mid-century doctor's raw, unvarnished account of his own descent into madness, and his daughter's attempt to piece his life back together and make sense of her own.

Texas-born and Harvard-educated, Dr. Perry Baird was a rising medical star in the late 1920s and 1930s. Early in his career, ahead of his time, he grew fascinated with identifying the biochemical root of manic depression, just as he began to suffer from it himself. By the time the results of his groundbreaking experiments were published, Dr. Baird had been institutionalized multiple times, his medical license revoked, and his wife and daughters estranged. He later received a lobotomy and died from a consequent seizure, his research incomplete, his achievements unrecognized.
Mimi Baird grew up never fully knowing this story, as her family went silent about the father who had been absent for most of her childhood. Decades later, a string of extraordinary coincidences led to the recovery of a manuscript which Dr. Baird had worked on throughout his brutal institutionalization, confinement, and escape. This remarkable document, reflecting periods of both manic exhilaration and clear-headed health, presents a startling portrait of a man who was a uniquely astute observer of his own condition, struggling with a disease for which there was no cure, racing against time to unlock the key to treatment before his illness became impossible to manage.
Fifty years after being told her father would forever be “ill” and “away,” Mimi Baird set off on a quest to piece together the memoir and the man. In time her fingers became stained with the lead of the pencil he had used to write his manuscript, as she devoted herself to understanding who he was, why he disappeared, and what legacy she had inherited. The result of his extraordinary record and her journey to bring his name to light is He Wanted the Moon, an unforgettable testament to the reaches of the mind and the redeeming power of a determined heart.
Read More
Praise for He Wanted the Moon

“An extraordinary Möbius strip of a book...Autobiography, biography, science, history and literature all in one, as instructive as any textbook and utterly impossible to put down...The text of Dr. Baird’s manuscript is haunting. The tone is one a suspense writer might struggle to sustain: The most unreliable of narrators, Dr. Baird is objective, charming, humorous, then suddenly just a little off, and then flat-out gone, leaving an irrational stranger in his place. The reader can almost watch the circuits in his brain surge and dim just as, Ms. Baird reports, the handwriting in the manuscript morphed from disciplined to disorderly and back again.”
—The New York Times

“Extraordinary...a remarkably eloquent account of mental illness, reminiscent of Kay Redfield Jamison’s An Unquiet Mind and Susanna Kaysen’s Girl, Interrupted. Perry Baird emerges as thoughtful and at times eerily aware of his condition as well as his inability to elude either its symptoms or the primitive treatments for them…The elder Baird’s narrative is cinematic, featuring Ratched-like nurses and an escape scene straight out of The Fugitive... [Dr. Baird] never really knew his daughter — or her achievement in telling this story.”
—The Washington Post

“Baird’s lonely, angry, grief-stricken, and occasionally grandiose account of his illness and its shattering costs is the reason we can’t put [this book] down. His sharply detailed recollections are sometimes sane and sometimes not, but his writing is lucid even when his thinking isn’t. His manuscript is a plea to understand his experience and, by extension, others’.”
—The Boston Globe

“He Wanted the Moon is one of the most disturbing and profoundly moving books I’ve read in years, and one of the great father-daughter books of our time. It will take its place as a classic in the literature of breakdown, alongside Kay Redfield Jamison’s An Unquiet Mind and William Styron’s Darkness Visible. The brilliant Dr. Perry Baird’s memoir lets you see up close what it is like to go through the most manic phases of bipolar disorder—it is a nightmare, but this book is a damn wonder. Through it, Mimi Baird has finally given her father the credit he was due.”
—Pat Conroy, author of The Prince of Tides and Death of Santini

“Powerful, fascinating, and completely unique. This heartbreaking book is a one-of-a-kind first person window into the world of psychiatric illness before the era of drug therapies in this country. Reading He Wanted the Moon is a bit like discovering the Dead Sea Scrolls—it is one of the most eloquent, powerful and important accounts of mental illness ever put to paper.”
—David Isay, founder of StoryCorps and author of Listening is An Act of Love and Ties that Bind

“Thanks to a daughter's brave determination to excavate her absentee father's life, we are gifted with deep personal insight into a brilliant but sick mind that could have been lost forever. This is a truly important book—a devastatingly honest account of mental illness that provides personal insight into long-ranging travesties of psychiatric care in the U.S. Unforgettable.”
—Susannah Cahalan, author of Brain on Fire

“Dr. Perry Baird’s vivid account of his own madness, and the treatment he received, is as remarkable as it is disturbing. By sharing her family’s story, Mimi Baird has certainly done a great service to her father’s memory. But she’s also made a significant contribution to the literature of mental health. He Wanted The Moon is a poignant book, and, I believe, an important one.”
—Alexandra Styron, author of Reading My Father

“He Wanted the Moon does for mental illness what The Immortal Life of Henrietta Lacks did for the science of cancer: at once reveal suffering and heal it through knowledge. By allowing her father to be heard, Mimi Baird gives voices to all Americans silenced by mental illness down the decades.  A miraculous story told in a miracle of a book.”
—Amity Shlaes, author of Coolidge and The Forgotten Man

“Here is how you know you have just read a wonderful book: You immediately begin telling everybody you know about it, which is exactly what I did when I finished He Wanted the Moon.”
—Robert Whitaker, author of Anatomy of an Epidemic and Mad in America

“He Wanted the Moon details the horrendous treatment commonly given to patients at a time when there was no known way of ameliorating the dangerous and self-destructive behavior that often characterizes manic-depression. This is a fascinating and informative book which I would highly recommend.”
—Dr. Elliot Valenstein, author of Blaming the Brain and professor emeritus of psychology and neuroscience at the University of Michigan

“Mimi Baird's short book about her father's long struggle with mental illness is a tale within a tale. She longed to know why he had simply disappeared one day from her life, and what she found was his own vivid account of watching himself slide into darkness. Mimi has performed a quiet miracle, giving life back to a man everyone wanted to forget.”
—Thomas Powers, Pulitzer-Prize winner and author of The Killing of Crazy Horse

"Astonishing in its illuminations...This striking and poignant family story evokes compassion for everyone affected by this cruel malady."
—Booklist

“Through this moving memoir, Baird slowly brings her father back to life and reveals the sordid history of treating mental illness.”
—Bookpage

“Perry Baird was a pioneer in attempting to understand the workings of manic depression…In bringing her father’s harrowing, tragic, and moving story to life, Mimi Baird celebrates him and gives voice to the terrible suffering the mentally ill once endured, and still do today, and challenges the prejudices and misperceptions the public continues to have about the disease.”
—Publishers Weekly

“Moving...[Baird] sketches the life of a man who had done brilliantly in college and medical school—even co-authoring a paper with the eminent physiologist Walter Cannon—but who would be felled by psychosis...A sobering account of how little we knew and how much we still have to learn about mental illness—especially how not to treat it.”
—Kirkus Reviews
Read More