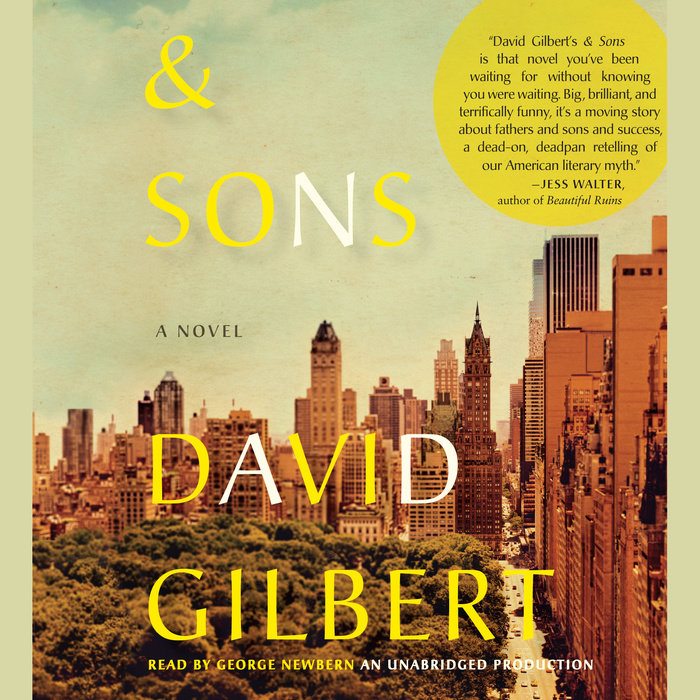 Who is A. N. Dyer? & Sons is a literary masterwork for readers of The Art of Fielding, The Emperor’s Children, and Wonder Boys—the panoramic, deeply affecting story of an iconic novelist, two interconnected families, and the heartbreaking truths that fiction can hide.

The funeral of Charles Henry Topping on Manhattan’s Upper East Side would have been a minor affair (his two-hundred-word obit in The New York Times notwithstanding) but for the presence of one particular mourner: the notoriously reclusive author A. N. Dyer, whose novel Ampersand stands as a classic of American teenage angst. But as Andrew Newbold Dyer delivers the eulogy for his oldest friend, he suffers a breakdown over the life he’s led and the people he’s hurt and the novel that will forever endure as his legacy. He must gather his three sons for the first time in many years—before it’s too late.

So begins a wild, transformative, heartbreaking week, as witnessed by Philip Topping, who, like his late father, finds himself caught up in the swirl of the Dyer family. First there’s son Richard, a struggling screenwriter and father, returning from self-imposed exile in California. In the middle lingers Jamie, settled in Brooklyn after his twenty-year mission of making documentaries about human suffering. And last is Andy, the half brother whose mysterious birth tore the Dyers apart seventeen years ago, now in New York on spring break, determined to lose his virginity before returning to the prestigious New England boarding school that inspired Ampersand. But only when the real purpose of this reunion comes to light do these sons realize just how much is at stake, not only for their father but for themselves and three generations of their family.

In this daring feat of fiction, David Gilbert establishes himself as one of our most original, entertaining, and insightful authors. & Sons is that rarest of treasures: a startlingly imaginative novel about families and how they define us, and the choices we make when faced with our own mortality.

“Smart and savage . . . Seductive and ripe with both comedy and heartbreak, [& Sons] made me reconsider my stance on . . . the term ‘instant classic.’”—NPR

“A big, ambitious book about fathers and sons, Oedipal envy and sibling rivalry, and the dynamics between art and life . . . [& Sons] does a wonderful job of conjuring up its characters’ memories . . . in layered, almost Proustian detail.”—Michiko Kakutani, The New York Times

“This great big novel is . . . infused with warmth and wisdom about what it means to be a family.”—The Boston Globe

“In terms of sheer reading pleasure, my favorite book this year was & Sons, David Gilbert’s big, intelligent, richly textured novel about fathers, sons, friendship, and legacies. . . . From [A. N.] Dyer’s slacker sons to a J. Crew-wearing young seductress, every member of Gilbert’s cast of characters is perfectly drawn.”—Ruth Franklin, The New Yorker

“Gilbert’s should be among the half-dozen or so names cited by critics and serious readers when they’re asked who produced [the year’s] most dazzlingly smart, fully realized works of fiction.”—The Washington Post

“If you read only a few books this year, this one should be one of them.”—The Huffington Post

“Clear the sand from your beach-book-overloaded mind for this smart, engrossing saga about a reclusive famous author and his late-life attempt to make amends to the many people he’s let down. Perfect for fans of Jonathan Franzen or Claire Messud.”—Entertainment Weekly

“A contemporary New York variation on The Brothers Karamazov, featuring a J. D. Salinger–like writer in the role of Father, and a protagonist who turns out to be as questionable a tour guide as the notoriously unreliable narrator of Ford Madox Ford’s classic The Good Soldier . . . a big, ambitious book about fathers and sons, Oedipal envy and sibling rivalry, and the dynamics between art and life, talent and virtue. The novel is smart, funny, observant and . . . does a wonderful job of conjuring up its characters’ memories of growing up in New York City in layered, almost Proustian detail.”—Michiko Kakutani, The New York Times

“Throughout & Sons, Gilbert provides lengthy excerpts from [his] novel-within-a-novel, and, as far as the reader can tell, Ampersand is caustic, comic, and clever, like Gilbert’s own novel. . . . Gilbert has a rich theme, and plenty of talent. He has a wonderfully sharp eye for the emotional reticence of the men of A. N. Dyer’s generation and class, for the ways in which their more open, more voluble children must become expert readers of patriarchal gaps and silences, in order to make sense of what he finely calls ‘these heavily redacted men.’ . . . Gilbert often writes superbly, his sentences crisp, witty, and rightly weighted. . . . Some of [his metaphors] realign the visual world, asking us, as Nabokov’s best metaphors do, to estrange in order to reconnect. . . . Every page proposes something clever and well turned. Gilbert is bursting with little achievements. . . . This is a writer capable of something as beautifully simple, and achingly deep, as this description of Richard and Jamie, as they see their mother approaching them in the pub: ‘The brothers straightened, reshaped as sons.’”—James Wood, The New Yorker

“This great big novel is also infused with warmth and wisdom about what it means to be a family.”—The Boston Globe

“When someone uses the term ‘instant classic,’ I typically want to grab him and ask, ‘So this is, what, like the new Great Expectations? You sure about that?’ But David Gilbert’s novel & Sons, seductive and ripe with both comedy and heartbreak, made me reconsider my stance on such a label. . . . This is the book I’d most like to lug from one beach to another for the rest of summer, if only I hadn’t torn through it in two very happy days this spring. . . . Gilbert’s portrait of [New York City] and its literary set is as smart and savage in its way as Tom Wolfe’s The Bonfire of the Vanities, half love letter, half indictment, and wholly irresistible.”—NPR

“In her iconic essay ‘Goodbye to All That,’ Joan Didion famously described New York City as ‘the mysterious nexus of all love and money and power, the shining and perishable dream itself.’ . . . David Gilbert’s layered & Sons probes that nexus from the inside, limning the emotional decay of two prominent Manhattan families and literary masterpiece that cages them. . . . Vivid, inventive.”—O: The Oprah Magazine

“Gilbert has great narrative gifts and a wonderful eye for the madness of families and the madness of writers. . . . & Sons is a novel that creates an imaginary author who is so real and flawed that the reader feels he understands American literature itself a little better after reading his story.”—Los Angeles Times

“The right novelist can turn even a novel about a novelist into a book big enough to delight all the rest of us.”—Salon

“A Franzenish portrait of a biting, aging New York writer, David Gilbert’s novel is perceptive, witty, and—like all great books about remote fathers and their sons—prone to leaving male readers either cursing or calling their dads.”—New York

“A thought-provoking and engrossing read . . . I found myself falling into [the characters’] lives, caring for them, worrying for them and ultimately missing them as the novel came to a close.”—Chicago Tribune

“& Sons is a sophisticated, compassionate novel, very much more than a clever take on the vicissitudes of the writing life. Funny and smart, it is lit with the kind of writing that makes the reader break into a smile.”—Financial Times

“A witty and ultimately tragic take on the perennial subject of how the sins of the fathers are visited on their sons. There are echoes of Turgenev here, to say nothing of Jonathan Franzen and John Irving. But the music is entirely Gilbert’s, and at the end of this bravura performance you'll want to give him a standing ovation.”—Newsday

“Brilliant . . . weaves together the frayed threads of fame, fatherhood, family and friendship into a meditation on the blessing and curse of creativity . . . Thoughtful, farcical, acerbic and original, Gilbert’s crisp writing and sinuous mind could grab and hold any reader.”—Bloomberg Businessweek

“[& Sons is] about the emotional bonds between fathers, sons and brothers—the overwhelming love that can’t be adequately expressed and the burden of unspoken expectations. . . . Gilbert is an inventive, emotionally perceptive writer.”—Associated Press

“Celebrates the power of words . . . thick with wit and close observation . . . [& Sons is] built to last.”—Minneapolis Star Tribune

“& Sons conjures a career’s worth of drool-worthy fictional fiction that’s so convincingly evoked, I almost recall writing a paper on it in freshman English class.”—The New York Times Magazine

“[A] big, rich book . . . With wit and heart, Gilbert illuminates the complicated ways that fathers and sons misunderstand, disappoint, and love one another and how their behavior affects the women in their lives.”—Real Simple

“& Sons is an often funny, always elegant, lingering gaze back at a world in which writers are still gods at the very center of culture.”—Esquire
Read More