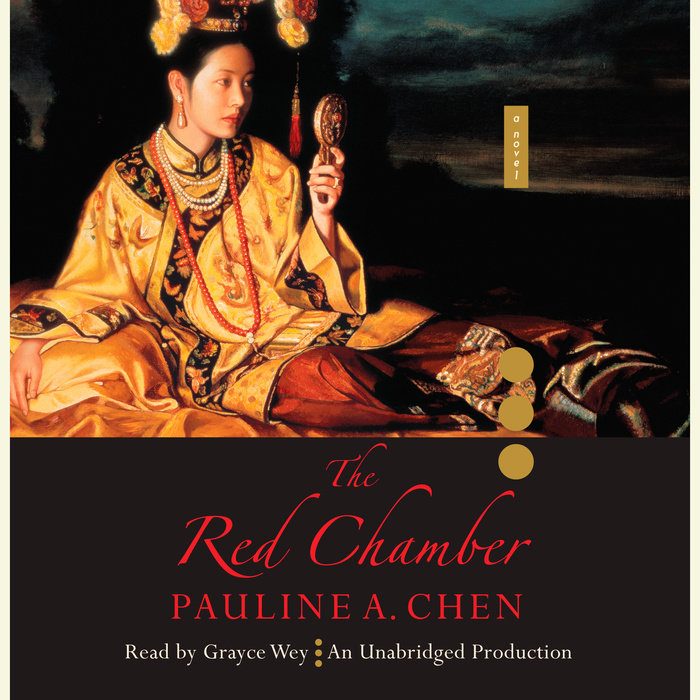 Written by: Pauline A. Chen
Read by: Grayce Wey

In this lyrical reimagining of the Chinese classic Dream of the Red Chamber, set against the breathtaking backdrop of eighteenth-century Beijing, the lives of three unforgettable women collide in the inner chambers of the Jia mansion. When orphaned Daiyu leaves her home in the provinces to take shelter with her cousins in the Capital, she is drawn into a world of opulent splendor, presided over by the ruthless, scheming Xifeng and the prim, repressed Baochai. As she learns the secrets behind their glittering façades, she finds herself entangled in a web of intrigue and hidden passions, reaching from the petty gossip of the servants’ quarters all the way to the Imperial Palace. When a political coup overthrows the emperor and plunges the once-mighty family into grinding poverty, each woman must choose between love and duty, friendship and survival.

In this dazzling debut, Pauline A. Chen draws the reader deep into the secret, exquisite world of the women’s quarters of an aristocratic household, where the burnish of wealth and refinement mask a harsher truth: marriageable girls are traded like chattel for the family’s advancement, and to choose to love is to risk everything.
Read More
“Pauline Chen’s boldly imagined retelling of The Dream of the Red Chamber is a literary wonder. An epic yet intimate account of palace intrigue and political tumult that dazzles on every page. Heartbreaking, exhilarating, and impossible to put down.”
—Julie Otsuka, author of The Buddha in the Attic

“Rarely does a cast of beloved literary figures from another culture and time come alive on the pages of a modern writer’s work. Pauline Chen has reimagined the characters from my very favorite novel to make a compelling new version of China’s great literary masterpiece. I highly recommend The Red Chamber. It will transport you into an altogether new world.”
—Arthur Golden, author of Memoirs of a Geisha

“In Pauline Chen’s transporting interpretation of the Chinese classic The Dream of the Red Chamber, the byzantine machinations and behind-the-screen politics of the Jia family are so skillfully rendered as to bring to mind a delicate ink painting suddenly and vividly brought to life. A remarkable achievement.”
—Janice Lee, author of The Piano Teacher

“The Red Chamber draws a memorable portrait of the Qing dynasty era, revealing a dangerous world of intrigue and secrets within the entrapping web of societal mores and manners. Written in a precise, cinematic style, Chen's novel brings this fascinating historical period to vivid life.”
—Dan Chaon, author of Stay Awake

“A vivid portrait…From the mighty heights to the depths of poverty and despair, the significance of female relationships, friendships, and rivalries are at the forefront of this compelling glimpse into an exotic time and place.”
—Booklist

“Ambitious and exquisite…utterly absorbing…sure to astound and enthrall readers up until the very last page. The Red Chamber reads like a Chinese Downton Abbey and is a fitting homage to a beloved masterpiece.”
—Tribute Books

“Moving, startling, and quite beautiful…a welcome, memorable introduction to characters vivid in the imaginations of generations of Chinese readers.”
—Cleveland Plain Dealer

“Compelling…intricate…thoughtful and provocative…No doubt Chen has provided us with a work that will not only be found on the list of historical classics but also become a part of the lexicon of the greatest love stories in the world.”
—8Asians.org

“Here is clearly a work of love and a pleasing introduction to a novel—and a world—that Americans deserve to get to know.”
—The Columbus Dispatch

“The Red Chamber offers a window into a foreign world…Chen’s framework provides a context for her characters’ actions, as often flawed as they are heroic, that makes things not just knowable but comprehensible.”
—The Denver Post

“Full of lavish details of the palace, sumptuous feasts, and day-day minutiae, levitating whispered conversations overheard by the wrong parties, capricious scheming between family members, and gossip hidden beneath every elegant tapestry and beaded pillow to lofted heights…There’s much to do about more serious matters, too—especially in the latter half of the novel, when political unrest in Beijing threatens to destroy the family’s tenuous hierarchy.”
—Publishers Weekly

“Bold and memorable…Chen retells and recreates in lush detail the daily life inside the Rongguo Mansion, where scandalous secrets and lies are hidden behind a grand façade.”
—Chicago Tribune