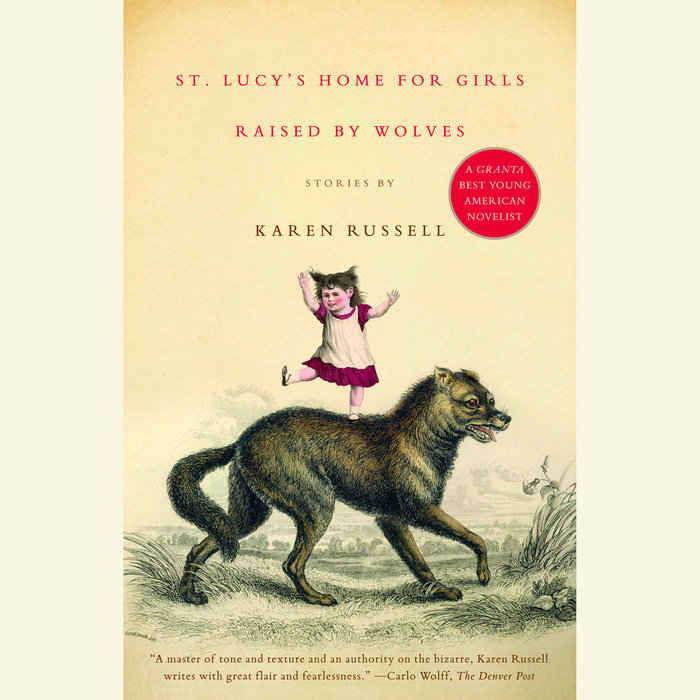 In the collection’s title story, a pack of girls raised by wolves are painstakingly reeducated by nuns. In “Haunting Olivia,” two young boys make midnight trips to a boat graveyard in search of their dead sister, who set sail in the exoskeleton of a giant crab. In “Z.Z.’s Sleepaway Camp for Disordered Dreamers,” a boy whose dreams foretell implacable tragedies is sent to a summer camp for troubled sleepers (Cabin 1, Narcoleptics; Cabin 2, Sleep Apneics; Cabin 3, Somnambulists . . . ). And “Ava Wrestles the Alligator” introduces the remarkable Bigtree Wrestling Dynasty—Grandpa Sawtooth, Chief Bigtree, and twelve-year-old Ava—proprietors of Swamplandia!, the island’s #1 Gator Theme Park and Café. Ava is still mourning her mother when her father disappears, his final words to her the swamp maxim “Feed the gators, don’t talk to strangers.” Left to look after seventy incubating alligators and an older sister who may or may not be having sex with a succubus, Ava meets the Bird Man, and learns that when you’re a kid it’s often hard to tell the innocuous secrets from the ones that will kill you if you keep them.

Russell’s stories are beautifully written and exuberantly imagined, but it is the emotional precision behind their wondrous surfaces that makes them unforgettable. Magically, from the spiritual wilderness and ghostly swamps of the Florida Everglades, against a backdrop of ancient lizards and disconcertingly lush plant life—in an idiom that is as arrestingly lovely as it is surreal—Karen Russell shows us who we are and how we live.


“A master of tone and texture and an authority on the bizarre, Karen Russell writes with great flair and fearlessness.” —Carlo Wolff, The Denver Post

“How I wish these were my own words, instead of breakneck demon writer Karen Russell’s, whose stories begin, in prose form, where the jabberwock left off. . . . Run for your life. This girl is on fire.” —Susan Salter Reynolds, Los Angeles Times Book Review

“Karen Russell is a storyteller with a voice like no other. . . . Laced with humor and compassion.” —Lauren Gallo, People

“One of the strangest, creepiest, most surreal collections of tales published in recent memory. . . . Her writing bristles with confidence.” —June Sawyers, San Francisco Chronicle